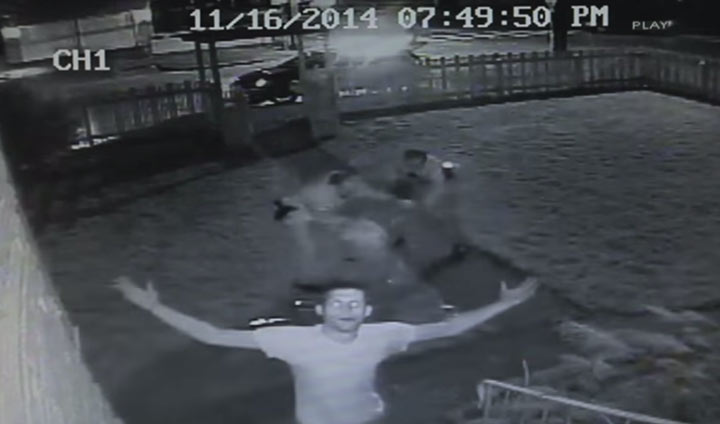 Here is how the BJJ Home Defense went down as reported by InsiderFoxNews.com:

Bout breakdown;
1:30 – Myers gets the takedown, landing a solid right to the head as the perp flops on the cold cement.

1:40 – Myers establishes mount and lands about a half-dozen face shots while the perp continues to wallow around aimlessly underneath Myers, probably thinking about what a horrible decision he had just made.

1:40 – 2:00 – Our Vet continues to dominate his opponent from mount, while landing several head-shots. His opponent seems to be using a series unorthodox techniques, mostly flailing around and straightening his legs like a scared goat. I would not recommend this style of defense.

2:03 – The perp tries a final time to escaping his fate with a useless and very laughable attempt, but Myers is still able to maintain his position, and detain the perp until the authorities arrive. By now the perp is definitely realizing the error of his ways, not that the dozen or so face shots hadn’t already solidified that thought.

2:07 – 3:34 – Since there is no audio, this is mostly speculation. The next 87 seconds were probably filled with please of mercy and bargaining techniques, since the perp was obviously going to jail, probably not for the first… second…. or even third time.

3:40 – During arrest, Myers stands victorious. Are you not entertained!!